I've got this idea to visit all the national and provincial parks in the Canadian Rockies. So far, I've only been to Banff NP, and Assiniboine Provincial Park, but I'd found a good trip in Wateron, so I booked the time off and started another adventure.

It's a long drive to Waterton so I spent a night in Cranbrook before arriving at the park gate the next day. I picked up my camping pass at the visitor centre and checked in at the warden cabin.  It's suggested that solo hikers leave an itinerary as it is considered a high risk activity. Then it was a short drive up the scenic, Red Rock Parkway, where I parked and prepared for the hike. 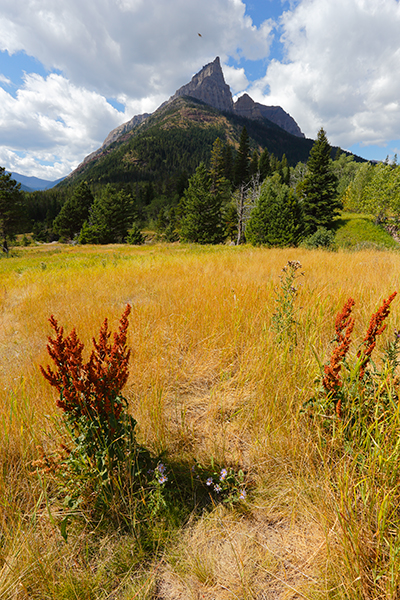 I was encouraged by views of the surrounding mountains before plunging into the forest. The first 4.5 kms are along an old road and I made good time. 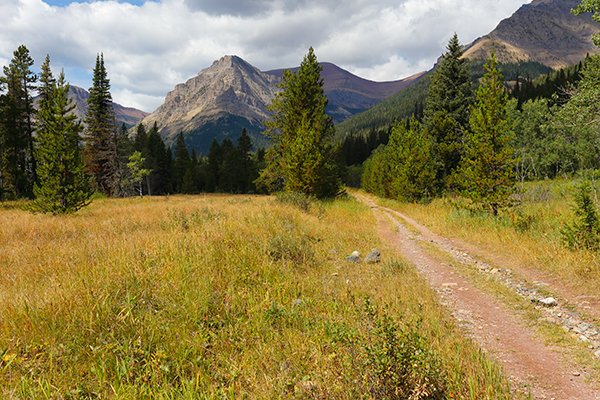 After an hour of this pleasant walk I reached the junction to Goat Lake. A young family was resting on the trail so I stopped for a minute to talk with them. Then it was time to face the tough climb and I huffed and puffed my way up the steep slope, gaining around 400 meters before arriving at the lake. 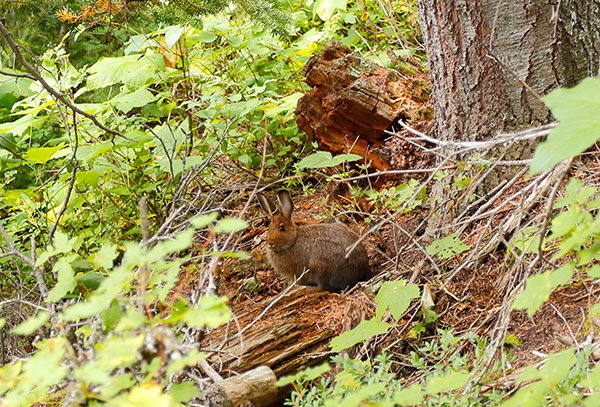 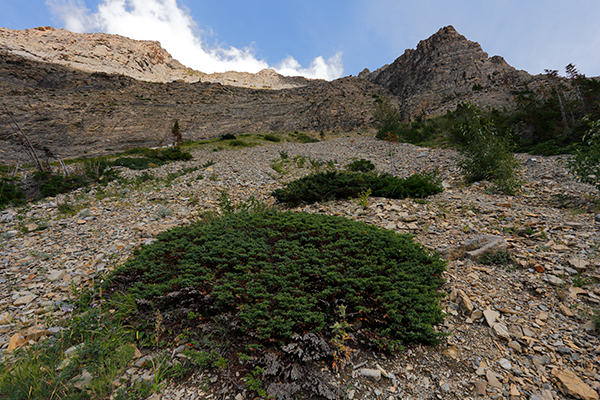 It didn't take long for me to set up camp and go for a little walk around the lake. 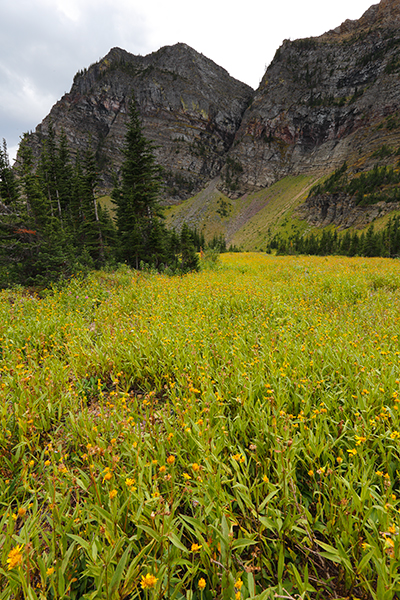 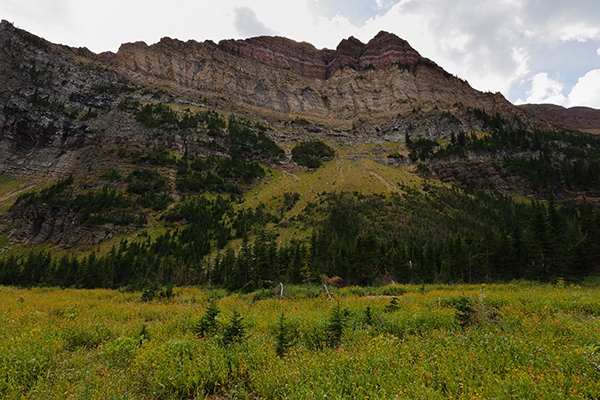 I climbed a rock slope to get an overview of the area. While I was up there I could hear the voices of the young children as they played around the lake. The noise was a little worrisome but they soon quieted down and it never became an problem. 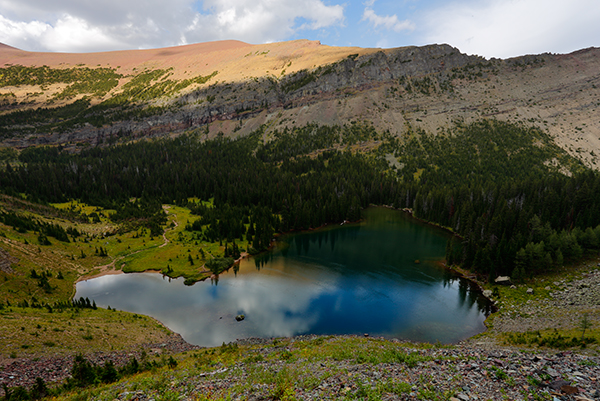 By the time I was back at the lakeshore it was time for dinner. After a quick meal I wandered along the opposite side of the lake, looking for some inspiration. The sky had some cool stuff going on but a light wind ruffled the water and ruined any thought of a reflection shot. I found an interesting rock formation in the shallow waters near the shore so I stopped and waited and eventually the wind died down. With the last bit of light fading from the sky I was able to frame a few shots.

Then it was time to turn in for the night. 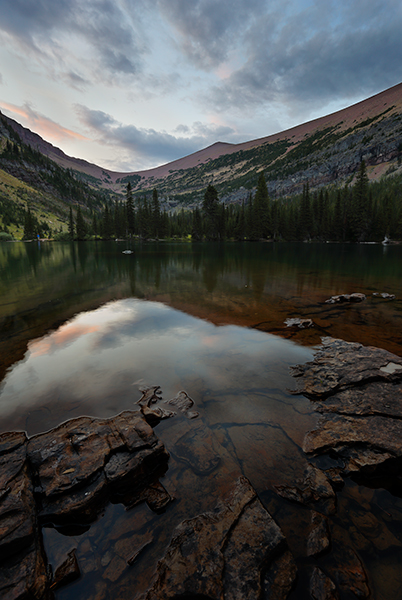 A light rain greeted the dawn and kept me in my tent until after 10:00. Once the weather broke I got up and had my usual breakfast of coffee and oatmeal. The kids, who were from Salt Lake City, were eager to talk to me so I lingered over my second coffee.

My goal for the day was to hike up to Avion Ridge and then summit a couple of the surrounding peaks. I had all day so I sauntered my way up the valley. There are cliff bands at the head of the valley but an easy trail leads through them. A figure was on the ridge so I quickened my pace to see if I could catch up. I'd spent a few minutes discussing my plans with a fellow camper and I thought it might be him.

The view back down the valley to the lake was impressive so I stopped for some photos. 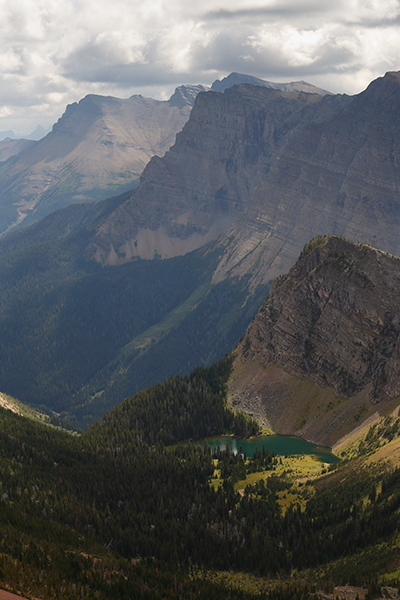 Just below the col the rock changed to a red argillite and there was very little growing at that elevation. I lost sight of the other hiker so I followed the easy footpath to the summit of Newman Peak. There I met Brian and we had a good talk while we took in the beautiful views. Unfortunately, Brian turned out to be an LA Kings fan so I couldn't let him join me as I headed towards another peak along the ridge. 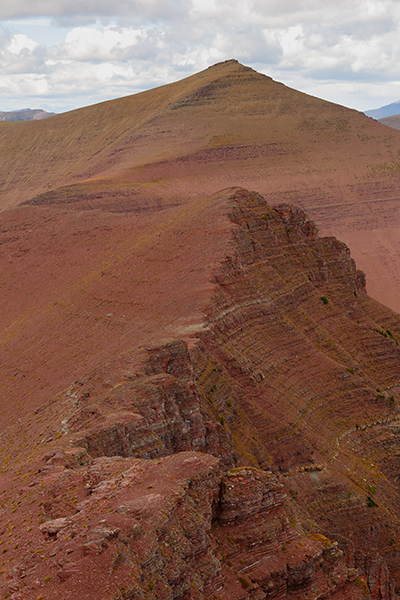 Dropping off Newman Peak was easy and the views down the surrounding valleys were spectacular. There was no path to follow but the way was easy, other than the loose rock. This area reminded me of the Valley of Fire in Nevada.

Minutes later I was standing on the summit of Spionkop. Ridgelines streched out in all directions, capped by the red rock. 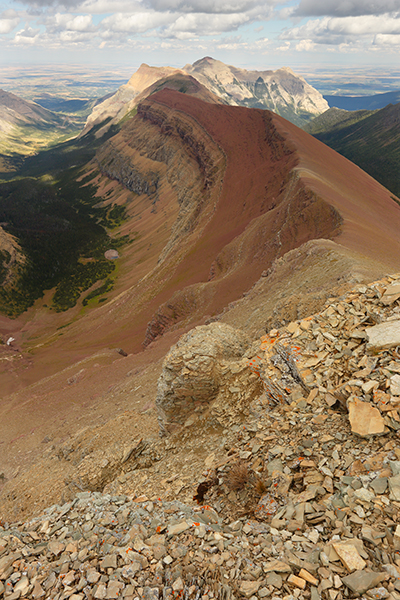 I spent awhile enjoying the scenery, looking back the way I'd come up. 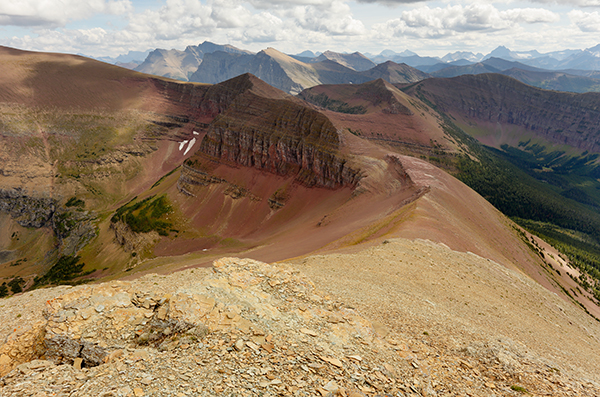 Retracing my steps, I found myself at the low point of the ridge taking photos. 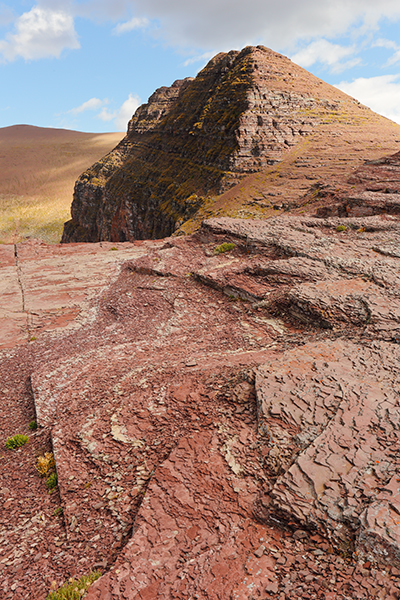 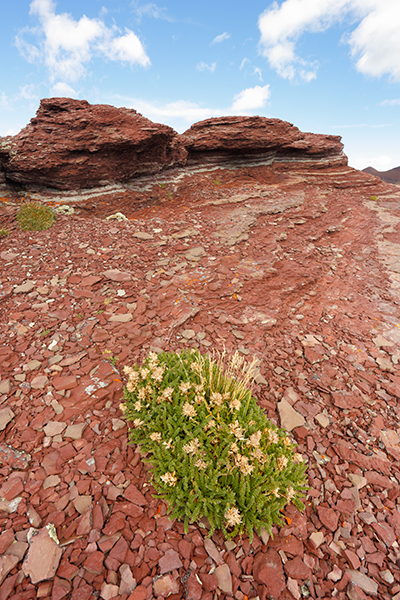 I figured I could sidehill below Newman Peak and save myself some elevation gain. Apparently I wasn't the first person to think that as I pick-up a faint trail and followed it back to the col above Goat Lake. 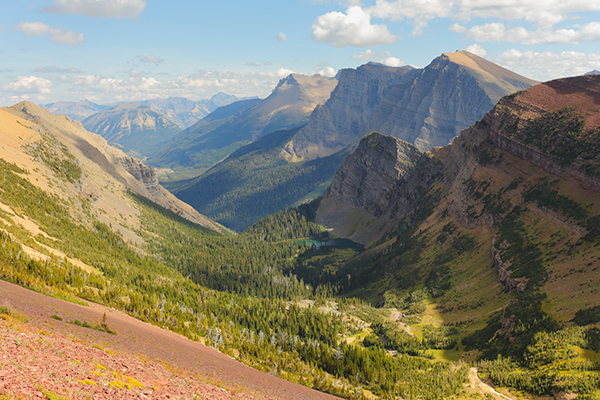 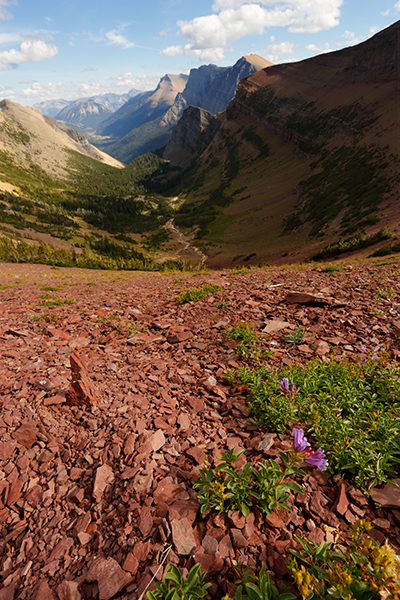 The dappled sunlight added some interest on the landscape. Then I ran across this outcrop topped with vegetation so I positioned it to get a sunstar. 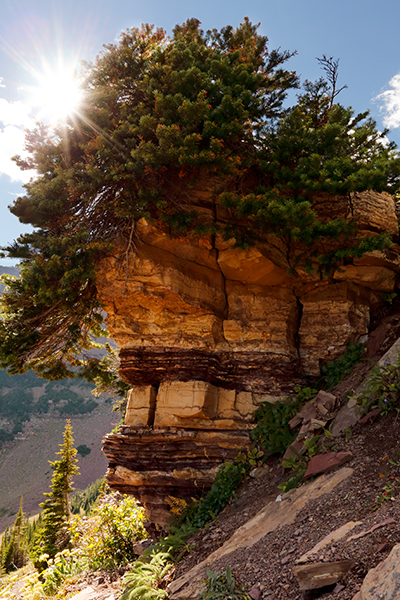 By the time I was back at camp it was time for dinner. I eat alot of noodle soup when I'm backpacking because it provides lots of calories in a light weight package. And it's yummy!

While I ate I met the newcomers, a family of 4 from nearby in Alberta. They invited me for tea, but not a real tea, a hot mint drink. We chatted while I kept one eye on the changing light. There was a deer wandering through the campsite. It made it's way into the eating area and slowly moved towards the food I'd left on the picnic table. I took out my phone at took a few photos. I didn't think anything of it until it started to nibble at my storage bag. Then I yelled at it and chased it away.

It was close to sunset, and eventhough the clouds had all dissappeared, I excused myself and headed to the lake to do some photography. None of the shots were keepers but it was a memorable evening as another deer almost walked into me as I sat quietly by the lake.

The next morning I slept in, a common occurance when I'm camping, but didn't miss anything because the sky was clear again. I still went down to the lake with my gear and when the light hit the top of the ridge I was able to get a couple compositions I was happy with. 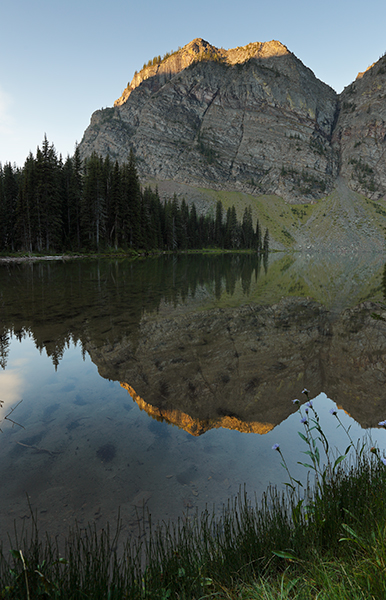 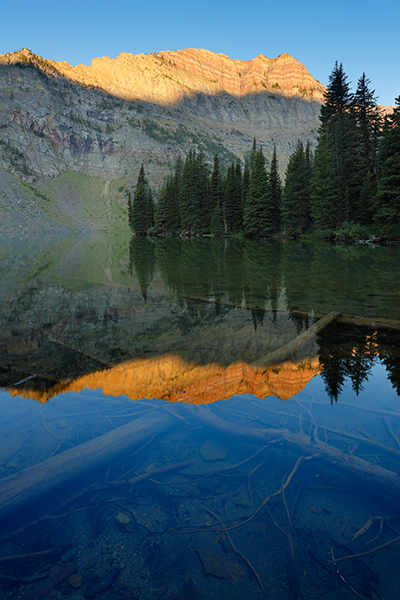 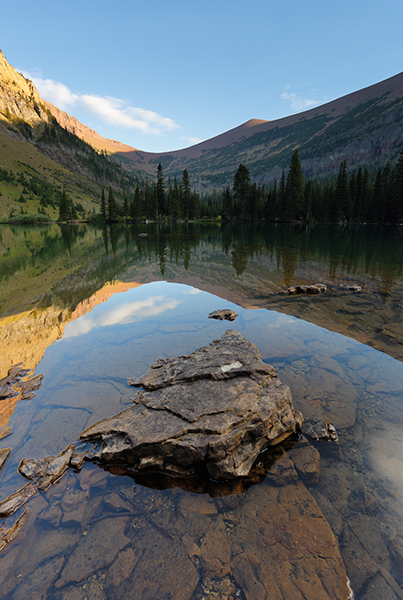 By 8:00am I was done and it was time to move to Twin Lakes.  My fellow campers were taking the highline route along Avion Ridge but I was taking the low way, which was much shorter and easier. Unfortunatley, the trail from Goat Lake to Twin Lakes is almost all forest enclosed so there were no views. It was also completely deserted and I saw no one until I arrived at the Twin Lakes campsite.

I don't know what they were smoking the day they laid out the campsite but my tent pad was smack dab in the middle of a berry patch! I ate as many as I could thinking I could make a difference. If there was a bear in the area it would be making a bee line right to my tent!

I rested my feet for awhile and read my book in the sun. It was relaxing and I soon found myself feeling refreshed so I figured I would climb the ridge behind the lake. Heading back the way I came, I soon found the Sage Pass trail and hiked the  graded switchbacks to the pass. From there another trail branched off to the south so I went up it, beginning to feel the days exertion in my legs. While not overly steep, the trail continued to gain altitude and I had to push myself to reach the summit.

When I was checking in at the ranger station the ranger had mentioned that I should hike to Kishinena Peak and there I was. The peak offers views down the valley I'd hiked to get to Twin Lakes as well as the valley I would hike on the way back to the parking lot. I took photos of the surrounding peaks and then headed back.

My legs were tired and my feet were pretty sore so I was thankful when I could lie down in my tent.

The sky was clear and at some point I decided to stay up and do some star photography. It seemed to take forever for the last light to fade and the stars to appear. I did a 20 minute exposure and got some decent trails but it didn't come out the way I wanted it to so I'll have to do more to figure out what I need to correct. 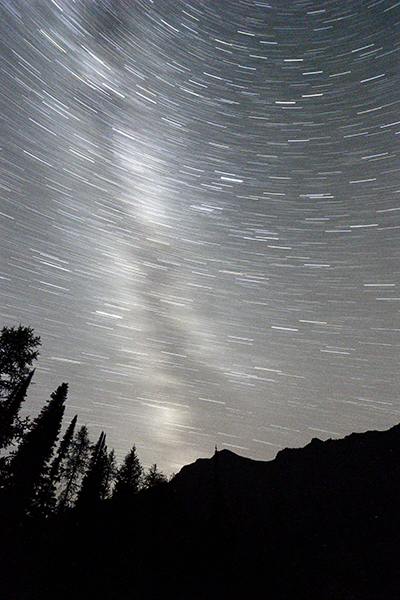 The next day had some weird light. A haze blanketed the entire landscape and cast a reddish hue to everything. I walked to the shore of the lake and took a few shots but there wasn't much appeal there for my tastes. 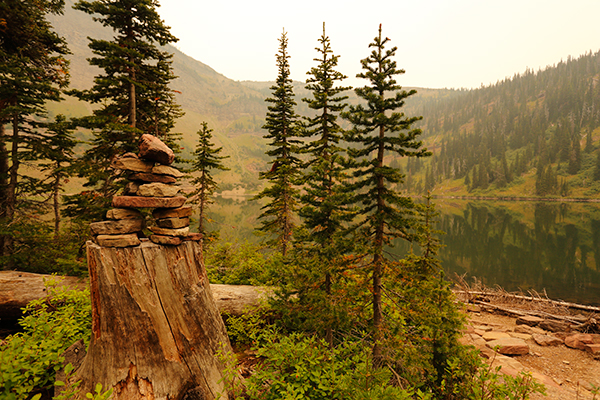 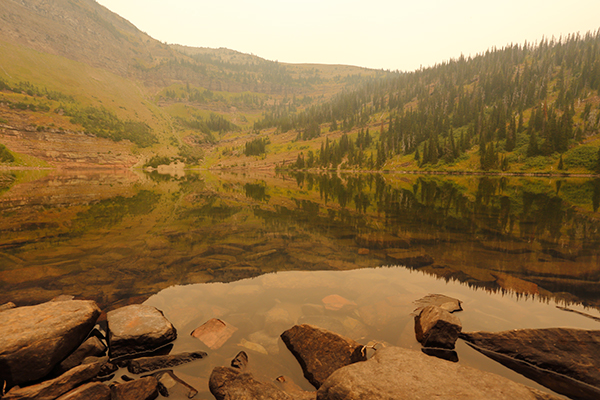 With a forecast of rain for tomorrow I decided there was no reason to hang around and then hike out in the rain the next day. Even if I climbed a mountain there'd be no views. 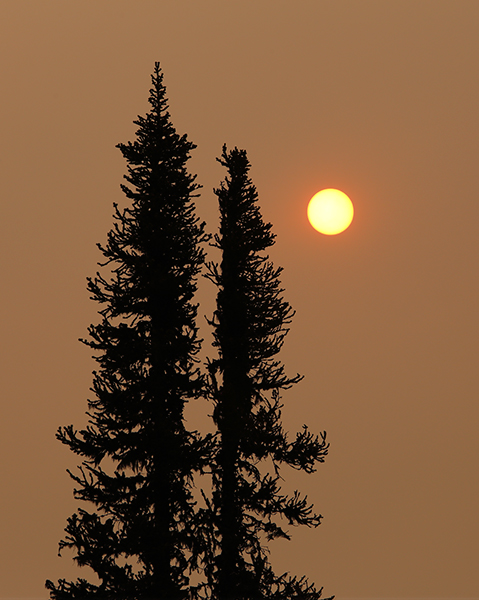 The hardest part of the hike out was climbing out of the Twin Lakes basin. From there it was all down hill through the forested valley. I sang out loud making lots of noise as I didn't feel like having any kind of bear encounter. About half way through the 14 kms hike, I felt a hot spot on my toe and when I stopped to look at it I'd developed a blister. I did the best I could to bandage my toe and set off again.

For 13 kms I had the trail to myself before reaching Blakiston Falls. This is one of the main tourist attractions in the area and people were flocking to it. I was a little out of place with my loaded backpack and 4 days of accumulated dirt and sweat. Within 15 minutes I was at the busy parking lot. I ripped off my boots and socks and let the air at my feet. It felt so good!

With nothing left to do but drive home, I stopped at the ranger station and checked out. They confirmed that the forecast was for rain tomorrow as well as thunder showers this afternoon! I felt pretty glad to dodge that bullet.

I'll make a return trip to Waterton Lakes in the future even though the long drive makes it a logistical challenge.

Reply allison
12:38 AM on October 19, 2015
Enjoyable to read your journey. It felt like I was right along side of you. Great photos too!

allison says...
Enjoyable to read your journey. It felt like I was right along side of you. Great photos too!

Thanks Allison. It's nice to hear your comments.Sometimes I think I'm just doing this for myself (I kind of am) so it's always good to get feedback!