A last minute cancellation meant that I was solo hiking again! I called Jasper to change my resevations and the lady I was talking to said that I should be aware that there was a very high level of grizzly bear activity in the valley! Great!

Tonquin Valley is renown for it's muddy trails and hordes of mosquitos but by the end of August I found the trails mostly dry and pretty much bug free.

With what I thought was going to be a relatively easy 14 kms to Switchback camp, I set a moderate pace, passing quite a few people who were heading out. Views across the Astoria River valley were constant and I kept gazing at the numerous peaks. 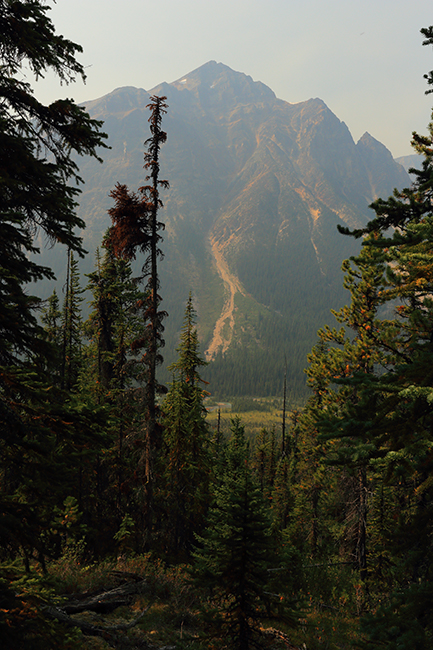 After around 4 kms I crossed the river and got to see the mountains on the other side. The trail is a decent grade until you pass a recent rockslide and begin the switch backs. 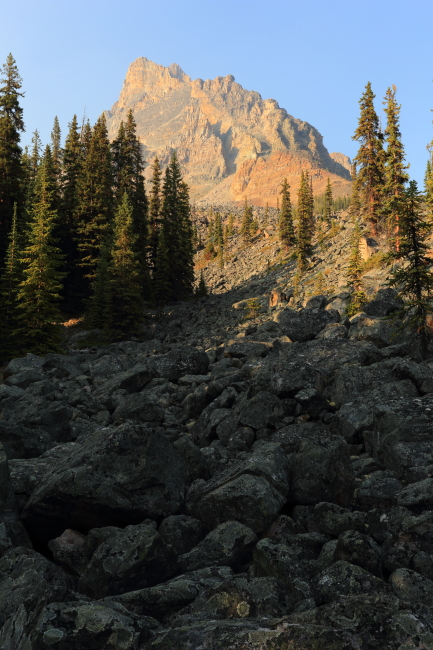 From a low point of 1700 m I gained almost 400 m before reaching my campsite for the night. 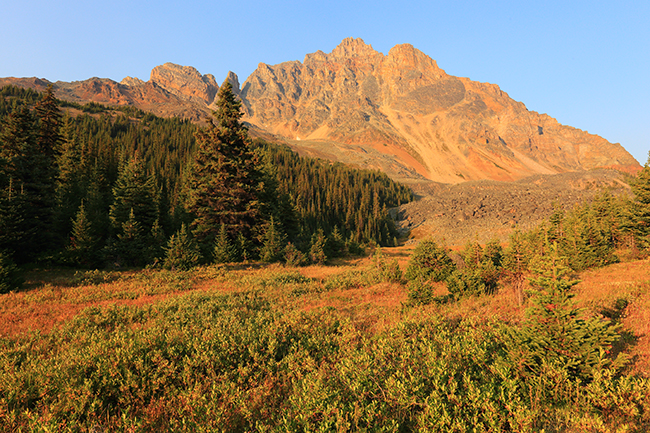 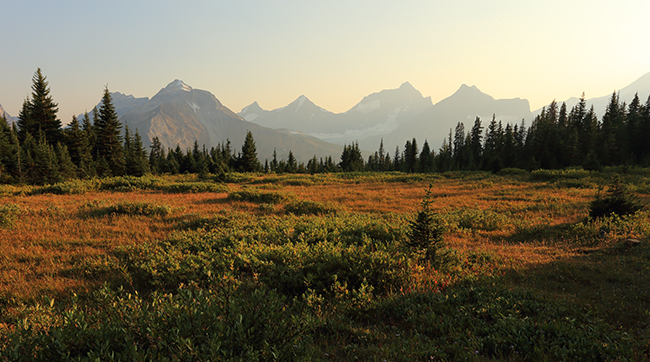 Without a great view I didn't spent too much effort doing any photography that evening or in the morning.

After a lazy morning I packed up camp and headed to my next campsite. The trail went past Amethyst Lake and I had to stop and gaze at the Ramparts, an impressive ridge of jagged peaks! 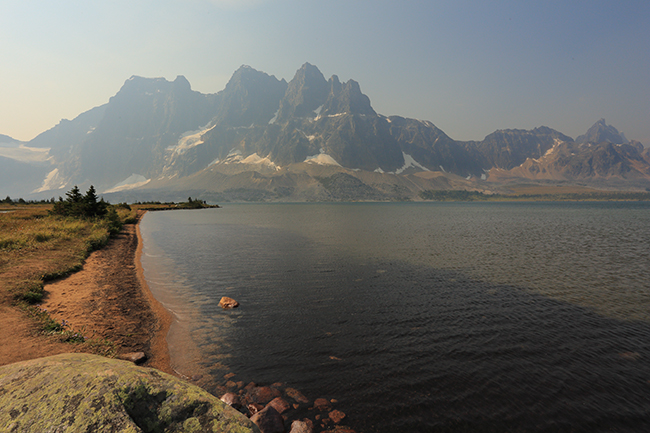 Past the lakes it was a short walk to Mccarib camp and I arrived in the early afternoon. After taking a short break to rest my feet I made an early supper and decided to explore the trail leading up the lower flank of Majestic Mountain. At the back of the campsite is the grave of a ranger who died nearby.  I was quite on edge and hiked with my bear spray in my hand.

It didn't take long to clear the trees and emerge on the open slopes.

The smoke from nearby fires made for some "interesting" effects as I wandered further upslope. 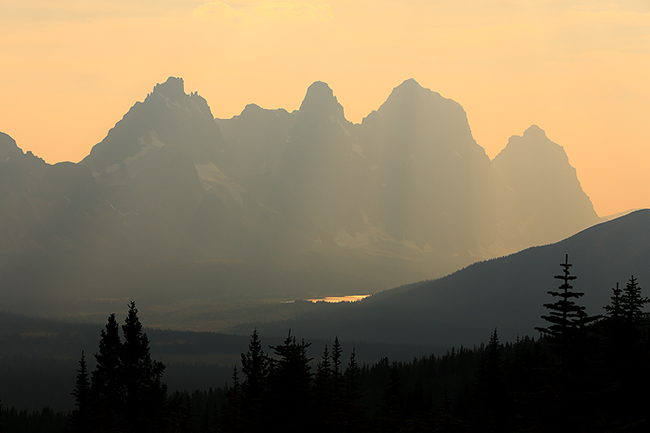 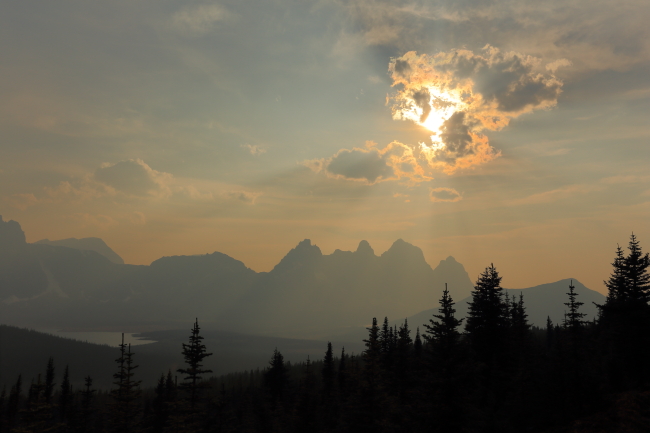 My confidence level wasn't very high and I couldn't seem to find a shot worth waiting for so I started back down. There was some nice light that caught my eye. 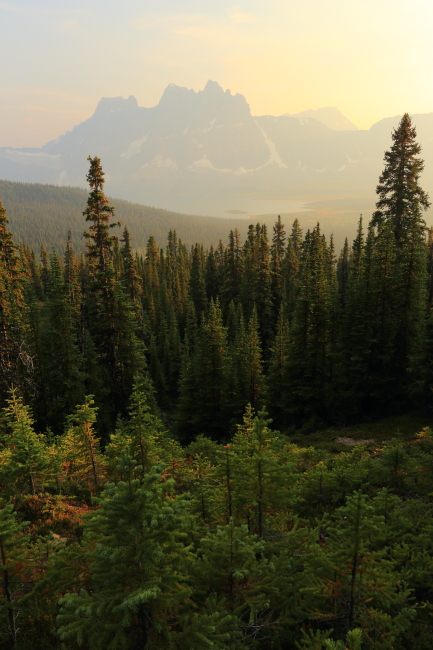 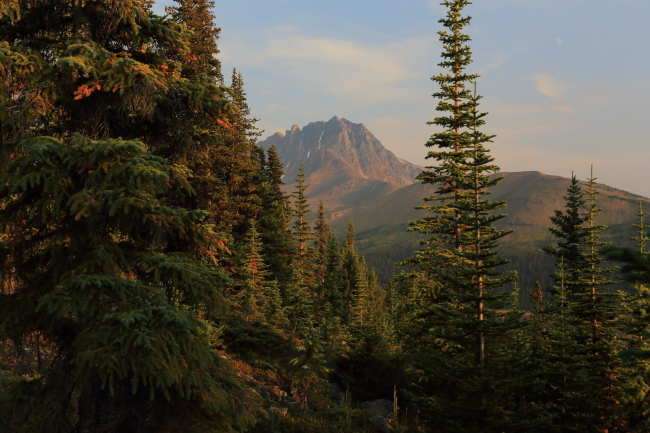 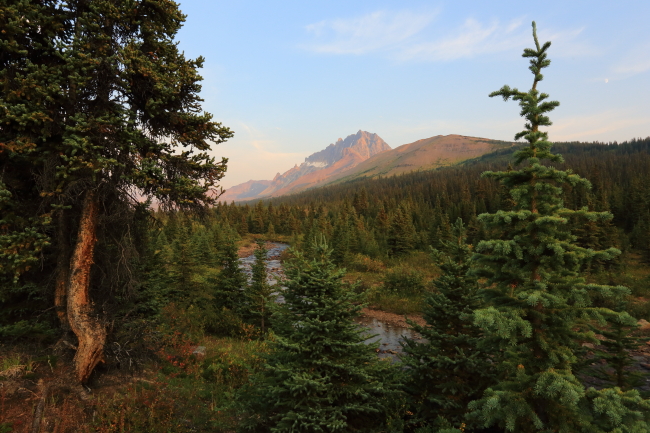 Due to booking my trip so late I couldn't get a very organized itinerary so in the morning it was time to pack up and retrace my steps to Clitheroe Campground. With less than 7 kms to get there I dallied along the way, stopping to photograph the Ramparts and any flower I could find. 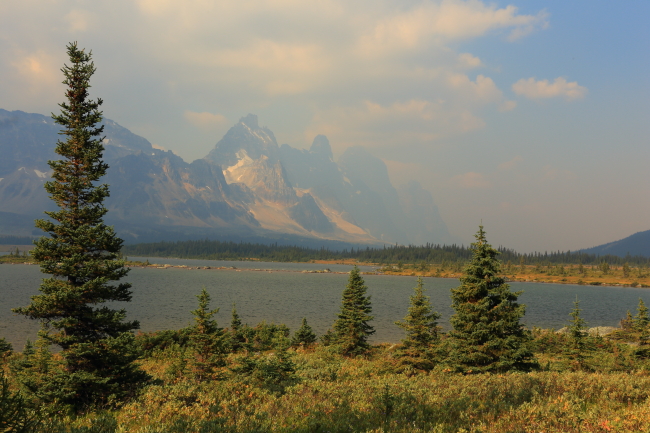 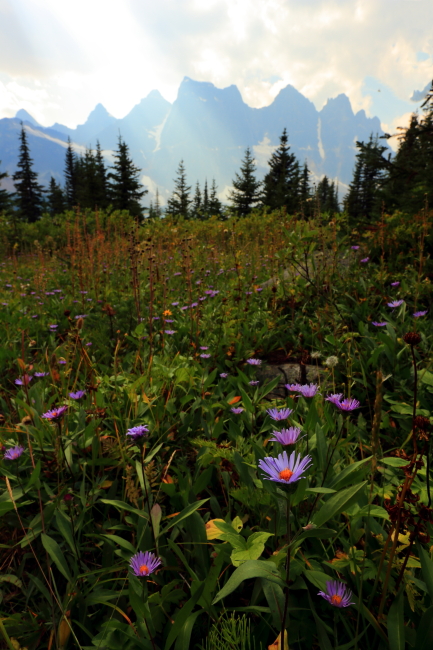 With lots of energy left in my legs after getting set-up I decided to do some exploring. It's a short, 2 km hike to Surprise Point with more great views along the way. 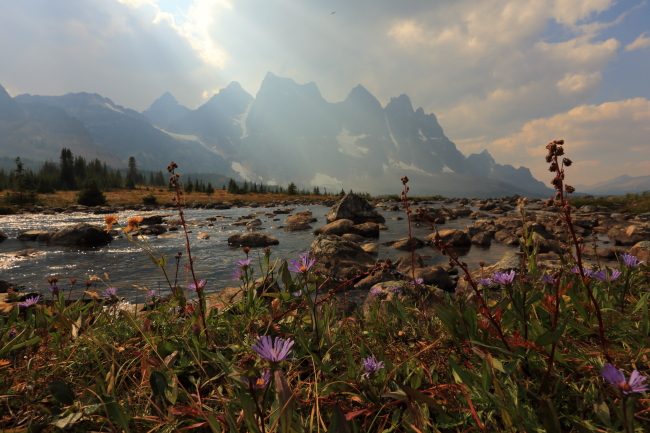 This part of the valley was deserted and I didn't see anyone at the campsite. Which was a good thing as I wasn't impressed with the "open concept" out houses. Although I must admit that the view was amazing! 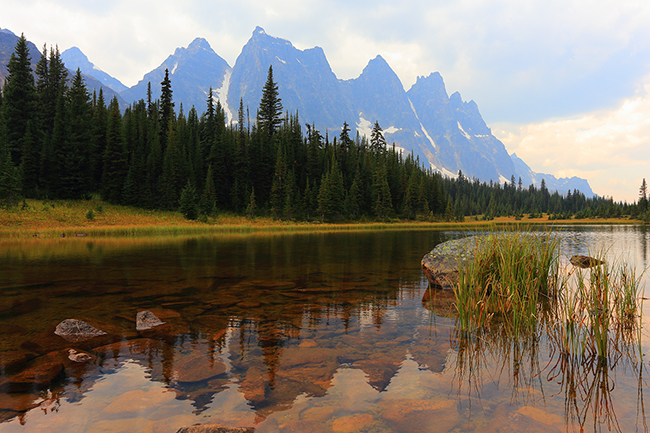 Tonquin Valley is really a wide open, high mountain pass. As clouds filled the sky I stopped and took a photo of tomorrow's destination, Eremite Valley.

Back at Clitheroe Campground I met Christophe, a hiker from France. He was planning on hiking Eremite Valley as well so I suggested we hike together. We made plans to meet in the morning.

After breakfast, I met up with Christophe. The plan was to hike to the ACC hut where I was booked for the night and see if there was room for Christophe to stay in the hut as well. Unfortunately there's provisions for walk-in guests. With that in mind, Christophe decided to not to hike Eremite Valley with me. We had some lunch and I dumped my gear before we hiked back down to the Eremite Valley trail head, where I said good-bye to Christophe. 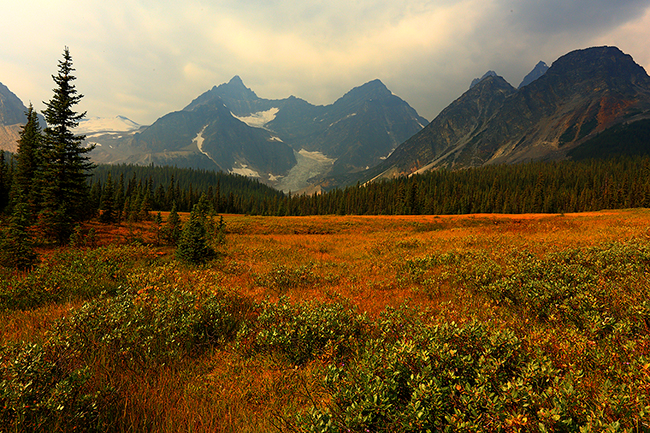 The sky was leaden above the silt-ladened streams flowing across the valley floor. The two streams exit the valley side by side, one through a small gap in the hillside, the other underneath it.

As the trail meandered along between the forested hillside and the shrub covered valley floor, I was getting a little freaked out. There could be a grizzly bear just meters away and I would have no idea unless it made it's presence known. I made plenty of noise as I hiked along, so it was a bit of a surprise when I spotted a moose about 50 meters into the valley. 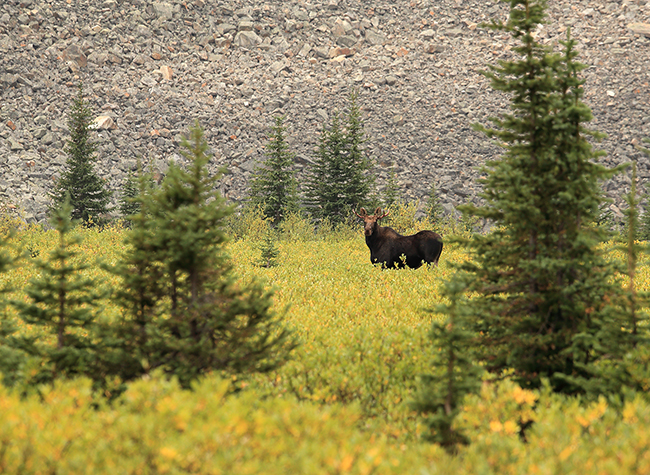 Thankfully it didn't disappear as I switched out lenses. This was the first moose I'd ever encountered in the wild andI spent several minutes photographing it before it decided it had had enough of me and quickly stode out of sight.

Soon after my moose sighting the trail began to climb towards the head of the valley. The path wound it's way through ripe berry bushes and I enjoyed a tasty snack until it dawned on me that I was in the middle of prime grizzly feeding grounds. A big pile of bear scat reinforced that fact.

I reached the head of the valley and the end of the trail. I would love to explore this area further but the overcast sky and the prospect of hiking back solo in the dark made my descision for me and after a short stop I headed back to the hut.

Back at the hut, I rested my feet and had some supper. With only a couple of hours of daylight left, I set out to explore around Outpost Lake.

The first thing that caught my eye was a small seedling, trying to gain a foot hold on a boulder. It was stunted and broken, struggling to survive in the harsh enviroment. 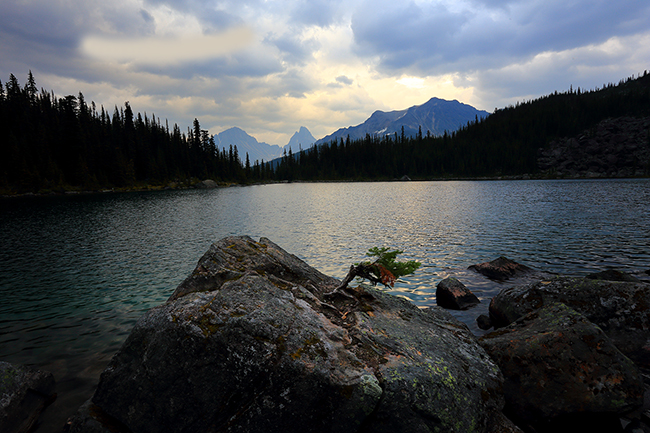 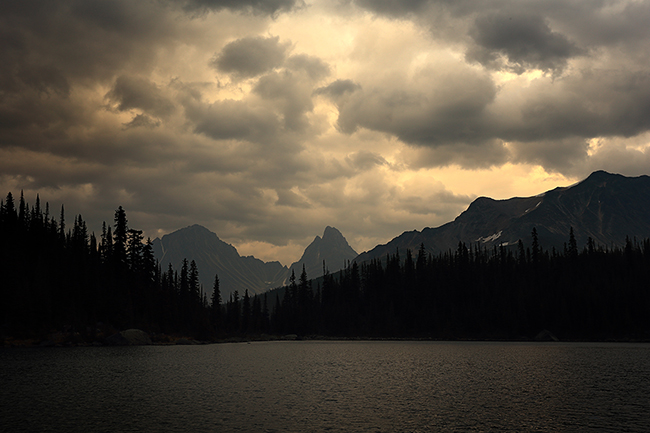 The gathering clouds warned of a storm to come but I was hopefull it was going to pass.

On the far side of the lake, I stopped to photograph the eastern side of the Ramparts reflected in the calm waters. 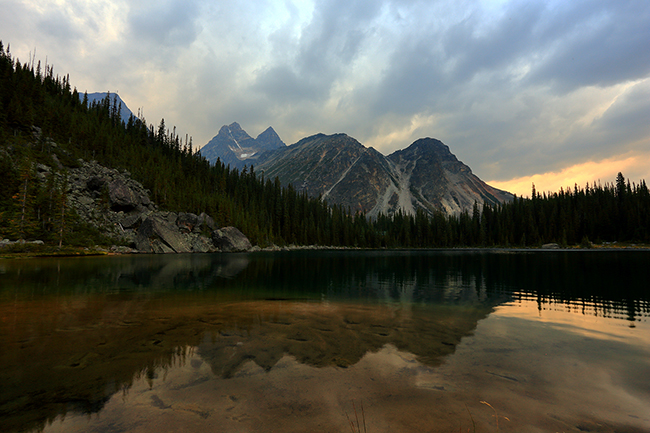 The outlet of the lake was easy to cross and from the other side I was able to get a good view of Outpost Mountain. 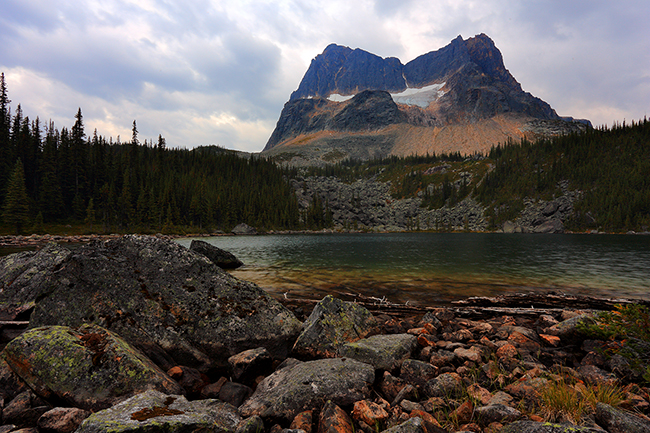 Darkness fell quickly and I headed back to the hut for the night.

The next morning I took a short walk by the lake, photographing Outpost Peak, before packing up and starting the 16 km hike back to the trailhead. 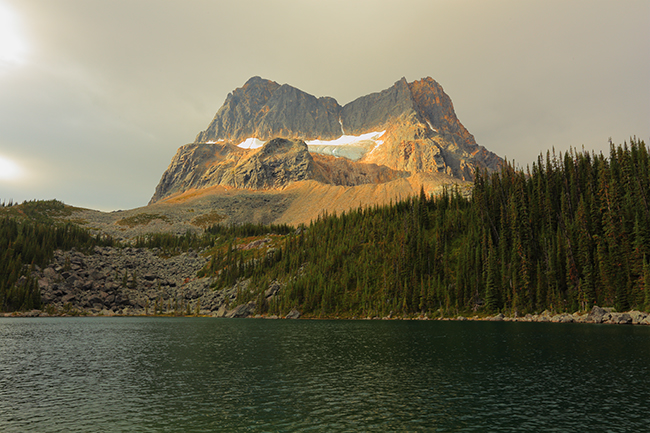 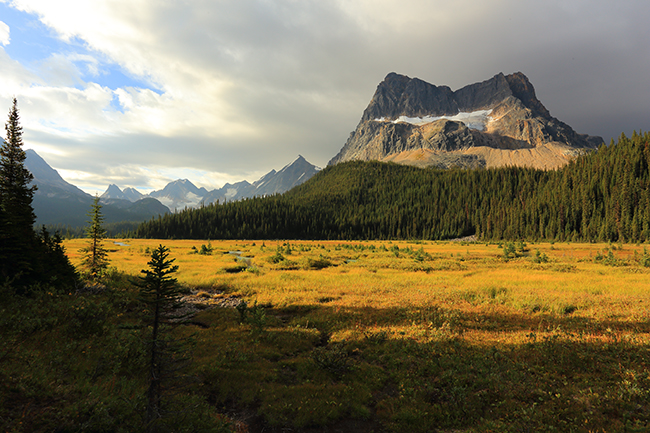 Leaving the Wates-Gibson hut the trail descends quickly and I stopped to take a few shots behind me. 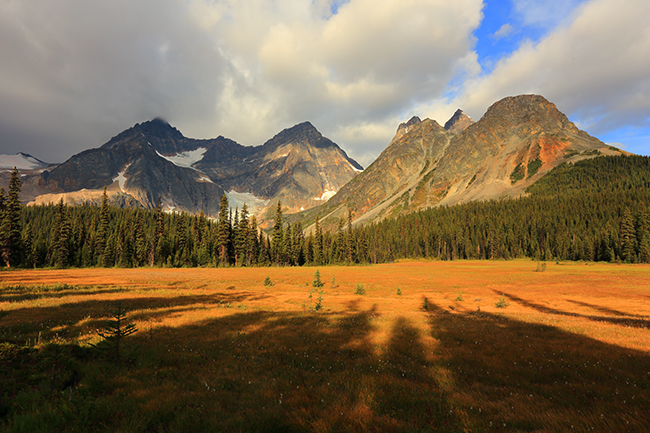 I made short stop at Chrome Lake and then carried on. 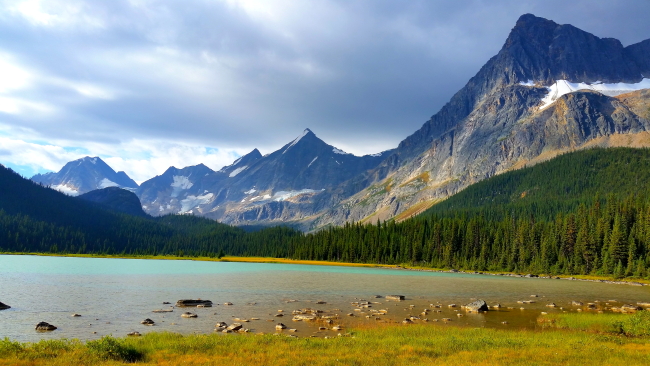 While most of the trails I'd hiked over the last few days had been relatively dry, the route along the south side of Astoria River still had lots of water flowing off the flanks of Thunderbolt Peak. It wasn't until I crossed over to the north side of the river that my boots had a chance to dry out. 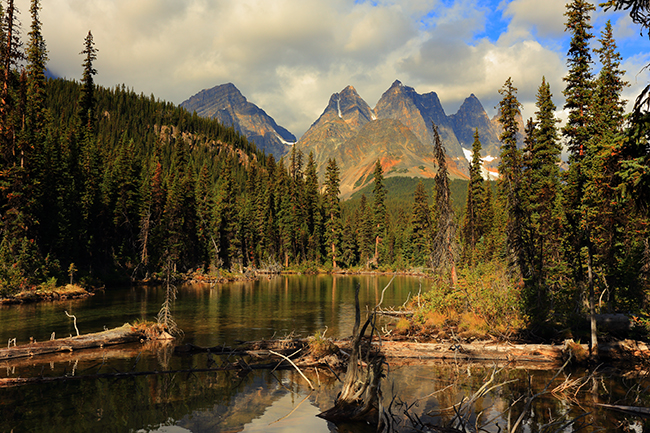 Only half way back, I was getting tired. I should have taken a longer break at the bridge crossing back to the south side but I was so intent on getting home that I just kept trudging along. 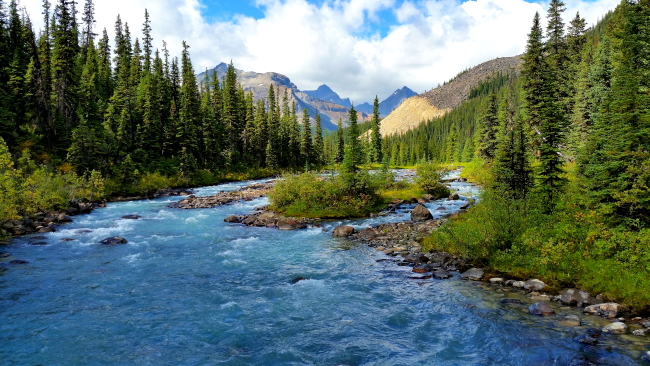 I struggled along for another couple of hours before finally reaching the truck. Then it was time for the long drive home.